As Europe turns it’s back on religion the rest of the world are looking in the other direction.

Rock stars and even the President of the USA could only dream of such adoring supporters at their concerts and rallies. 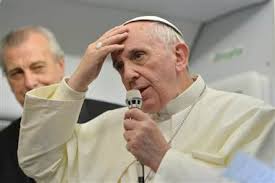 Pope Francis I is very charismatic and reminds many Catholics of Blessed John Paul II, the former pontiff who is set to be canonised (to be made a Saint) next year. The Pope is also an excellent communicator speaking plainly and not hiding behind ecclesiastical rhetoric, which Benedict XVI as an academic was prone to do. On the way back from Brazil, Pope Francis held a press conference at the back of the papal plane for nearly an hour and a half. When asked by journalists about rumours of a “gay lobby” in the Vatican, the Pope made headlines around the world when he said: “If someone is gay and he searches for the Lord and has good will, who am I to judge?”. The Roman Catholic leader continued: “The catechism of the Church explains this very beautifully”. He added: “We shouldn’t marginalise people for this. They must be integrated into society.”

This Papal words on homosexuality is a break from the hard-line rhetoric of Pope John Paul II and Pope Benedict XIV, which I welcome, and is a signal from the current pontiff he knows there are gay priests but as long as they remain celibate it doesn’t bother him.

The Pope may well be the leader of 1.2 billion Catholics but he is also a sharp political operator, which you would expect from a Head of State, and, along with leading the faithful, his mission is to shake up one of the oldest institutions on Earth. His papacy should be very interesting indeed.