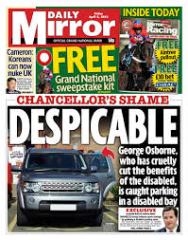 A mainstream national newspaper today published a picture of a Land Rover in a disabled parking spot with the snarling headline: “DESPICABLE”.

If only the Labour stalwart Daily Mirror used such vitriolic language to describe the needless deaths of thousands of people at the hands of NHS nurses and doctors or even the way Mick Philpott, for instance, installed two women as cash cows to milk the benefit system claiming another several hundred pounds off the State for every child born, which he duly pocketed himself. Or maybe they could stretch to use the word “DESPICABLE” to describe Philpott’s disdain for his children he killed, so much so that when the eldest child, Duwayne, was dying in hospital, Shamless Mick was kicking off in the corridor about the “crap” hospital who had not provided them with food. No?

Instead, Labour’s favourite red-top used the word “DESPICABLE” to describe Chancellor of the Exchequer getting back into the car his police protection officer had parked in disabled bay at a service station.

The silence from Labour politicians and their Hard-Left allies over the scandal of thousands of people needlessly dying in NHS hospitals is deafening but when it comes to defending a welfare system which allows one man to father 17 children and claim the cost of their upbringing entirely from the taxpayer, receiving £100,000 tax-free, you can’t get the likes of Ed Balls and Owen Jones off the airwaves.

New Labour deliberately grew the welfare state between 1997 and 2010 to hide their economic incompetence in creating real jobs and to build a client-state who would duly vote Labour to ensure their benefits were not stopped by the “Tories”.

Labour’s ideology has cost the taxpayer hundreds of billions of pounds and condemned millions to a life of dependency and idleness.

Labour may not have created a monster like Mick Philpott but they didn’t stop him (and in fact encouraged him) extracting as much money from the welfare system as he possibly could until he was stopped by the judiciary after killing six of his children. 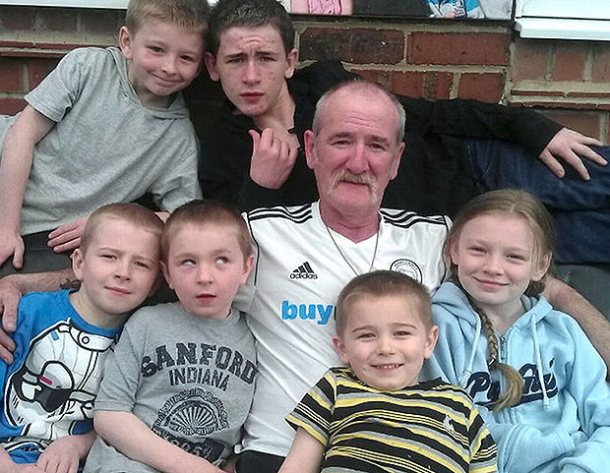 ‘Shamless Mick’ Philpott and his children he killed

The death of six children caused by their parents is an incredibly sad story and this is my overriding thoughts after the conviction of Mick and Mairead Philpott for manslaughter on six counts at Nottingham Crown Court yesterday.

But is also the worst indictment of the welfare system in this country, that a couple could claim £60,000 – tax-free – a year in benefits, could boast about it TWICE on national television, and then through – in part – motivation to get a bigger house from the local council they set fire to their council home, just hoping their children got out alive. They didn’t.

The jury agreed with the prosecution that Philpott’s motivation was money: massive handouts from the taxpayer.

Trial judge Mrs Justice Thirlwall has reserved sentence until tomorrow morning and her words will no doubt be listened to carefully for signs the judiciary believes the welfare system is now dangerously out of control. Even the minister responsible for welfare reform admits he is not reducing the benefits bill to the taxpayer contrary to the fake bleating of the Left. But as the judiciary in the main is part of metropolitan liberal elite, I wouldn’t hold your breath for harsh words from the judge on the hand-out culture we have in this country, never mind a harsh sentence which Mr and Mrs Philpott and their accomplice, Paul Mosley, truly deserve.

This case is the glaring light on a failed system which William Beveridge never wished for or envisaged in his 1942 Social Insurance and Allied Services report which led to the welfare state being put in place by the Labour government after World War II. It was meant to be a safety net if a person lost their job so they didn’t starve. It was never meant to be a way of life. It certainly was never meant to allow someone to take home more money than an average worker, which was a deliberate policy by Tony Blair and Gordon Brown between 1997-2010 to create a Labour client-state and voting fodder.

The Government, for all the announcements over the last few days, have not actually implemented the so-called ‘Universal Credit’, which should stop people being better off on benefits than in work. The computer system which will administer this complex programme is not built yet.

Why should we think the scrounger-state will ever be dismantled?