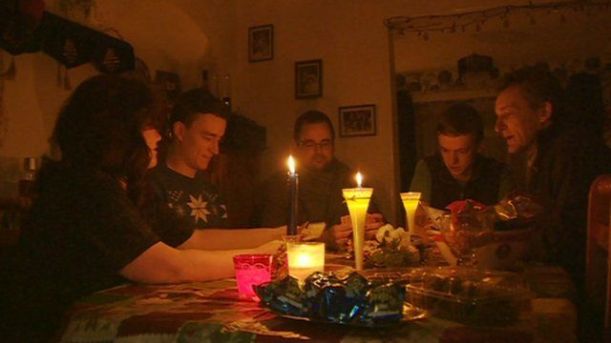 UPDATE: Conservative Environment Secretary, Owen Paterson, has also voiced his concerns over the unacceptable delay in returning power to thousands of customers cut off by stormy weather just before Christmas with many left without power on Christmas Day and onwards.

Mr Paterson said power companies had “let their customers down badly” and UK Power Networks CEO Basil Scarsella said his company “could and should have done more” to restore power.

Perhaps I wasn’t being such a Red Gav after all?

Hmm, perhaps it’s an ability to keep the lights on when there is a bit of a breeze?

My inner socialist has come out again this morning. Just been watching a Sky News report on those still without power since before Christmas.

Customers, yes customers, have been left on hold for three hours by the electricity firms when they have called to find out when they can expect to have the lights turned back on. And still, five days on, thousands of homes are without power. Why were there not representatives from Southern Electric on the ground with mobile canteens to feed people and give them hot drinks?

Impotent: David Cameron pretends he can actually do something about the continuing power cuts in Kent

This is the problem with privatised utilities – they literally can do almost anything they like. David Cameron was in Kent yesterday listening to the woes of voters; he came across as completely impotent on the issue – because he is! The Prime Minister has no power (no pun intended) to tell the energy firms to pull their fingers out and get men on the ground.

For electricity companies to turn round to customers, yes customers again, and say if you don’t get your power back on by 23:59 on Christmas Eve then you will *not* have power on Christmas Day is a disgrace. They have just put our electricity bills up by over 100% in many cases and this is how they treat their so-called customers.

If they were nationalised, I suspect things will have been resolved by now or there would be a mutiny on the streets. At least David Cameron is visible unlike the faceless fat cats of Southern Electric who no doubt are tucked up warm in their mansion far away from the plebs they pretend to “serve”.

Labour leader Ed Miliband: He’s not as stupid as he looks

I know it is fashionable to laugh at Red Ed and patronisingly say he’s not that smart when it comes to economics. Except, he is VERY smart and was the Chancellor of the Exchequer’s right-hand man when he worked alongside Gordon Brown before 2008.

It would be very trivial to suggest either Gordon Brown or Ed Miliband are stupid. Misguided, yes, and certainly socialists but they also have the requisite skills to create a socialist economy just not a free-market economy.

But I think it has come to a point in the year 2013, where the debate between socialism and free-market economics is becoming redundant, just like the old Left versus Right arguments. I am a strident believer in capitalism, which is the foundation for free-markets, but in my view capitalism, in the UK at least, is broken and no longer serves the masses. We need reform. When Margaret Thatcher unleashed the power of the market during her reign in the 1980s it was abundantly clear socialism and 90% income tax rates were strangling ordinary workers financially and something had to be done.

But once the blue touchpaper was lit it was very difficult to stop the subsequent chain reactions. Between 1985 and 2000 the good times were there for all to enjoy: privatised utilities gave shares to the masses (unlike the Royal Mail sale where most were locked out because of the £750 threshold), people were lifted out of the dirt (literally) in manual labour jobs and allowed to become bankers, IT consultants, small business owners because of mass deregulation and low taxes brought about by Thatcher’s chancellors. The babyboomer generation fell smack bang right in the middle of the economic boom and they have done extremely well. As I am reminded when I see the new Range Rover parked outside my house as a babyboomer tends to his cash-buy terrace house a few doors down in preparation for renting it out!

But the wily boss class spotted an opportunity to get even richer and took control of the “free” market and since 2000, if not before in the 1990s, ordinary workers wages have been pushed down year-on-year. This does not just affect the unskilled and semi-skilled, but professionals in engineering, law and IT. Millions of people working in our biggest businesses haven’t had an above inflation pay rise for almost 15 years whereas the boss class have seen their salaries rocket, with it now unheard of for a CEO not to take home at least £1 Million in cash each year – before bonus, share options and their pension.

The money is there. It’s just now all funnelled to the top. This is why I scratch my head when I hear the boss class say with a dreaded look on their face that if they are forced to pay their employees a living wage, prices will need to go up. I’m not convinced anymore when there is such a gulf in wages between the top and the bottom of an organisation. There is clearly money about but perhaps greed has got the better of those at the top.

In the seventh largest economy on Earth, surely the private sector who create this wealth can afford to pay all employees enough so they don’t have to choose between eating and heating each winter? I will be accused of being economically illiterate. So be it. But when there is such disparity of wealth in one of the world’s richest countries, you have to question everything. When Labour brought in the Minimum Wage, the boss class said the world would end – except it didn’t. Labour’s Living Wage isn’t even as half as radical as the Minimum Wage with a tax break being offered to businesses who pay it.

Of course, this new policy from Labour is massively tinged with political campaigning but that’s the result of a democracy and rightly so. I even suspect Dave will be desperately trying to find his own living wage policy pretty soon…