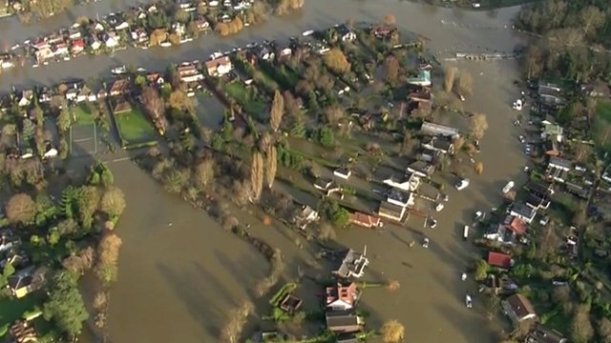 Catastrophe: The River Thames has burst its banks

If there’s some flooding in a far flung archipelago, the do-gooders in the left-wing quangos are out of the blocks quicker than you can say “Show me the money!” with the Disaster Emergency Committee buying up air-time on the beeb and commercial channels  and the Ministry of Defence dispatching a frigate to help the desperate people.

If the same thing happens back in Blighty, the Government doesn’t lift a finger for weeks, and when the water is almost at the gates of Downing Street there is hardly a flurry of action, relying instead on local people to co-ordinate the actions their tax pounds have already paid for.

This reality was brought into stark focus this morning when Defence Secretary (sans army) headed to the Thames Valley to show he “understands the concerns” of ordinary Britons whose houses and local streets are under water. Watch below Philip Hammond being berated live on Sky News by a local resident when Mr Hammond tells her he has 1600 troops on “stand-by”. She goes through the list of civic authority actions the council isn’t doing, the Environment Agency isn’t doing, the Police aren’t doing – and, therefore, the lady and her neighbours have had to take on themselves, including directing the traffic.

What on earth is going on? It’s as if Government has collapsed. We clearly have the resources, if they are not helping flood victims in the Far East. Do we, the ordinary public, need to push the politicians out of the way and commandeer them ourselves?

Great Britain is the sixth richest country on Earth but we can’t even manage to build a complete wall of sandbags.

Error: Twitter did not respond. Please wait a few minutes and refresh this page.