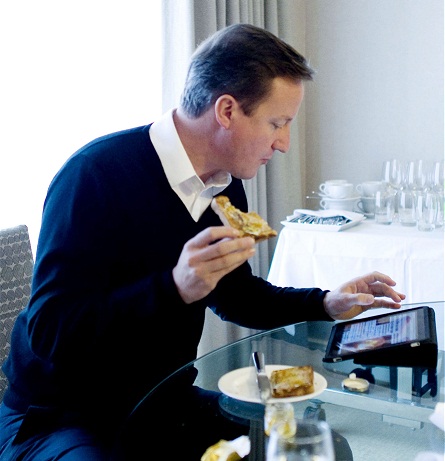 Follow my lead: David Cameron keeping warm in his jumper

I was chatting to a fellow politico online earlier about the BBC’s Question Time and he was suggesting it was biased (shock, horror!). I countered by saying it wasn’t the production that was bias but more the fact the three main parties are all the same – you could hardly put a cigarette paper between Labour’s Tristram Hunt (yes, he is Labour even with a Tory name like that!) and Mark Harper (what a dull dull politician if there ever was one!). And then the producers need to fill out the panel with people who can actually string a sentence together so they book, on the whole, media types or celebrities and they are nearly always left-wing, which is hardly surprising considering they collect their dime in an industry which has always been stacked full of lovies and right-on metrosexuals! Every now and again a right-winger from the media world turns up such as TV historian David Starkey or former Sun editor Kelvin MacKenzie. I have also been in the audience when they record Question Time and there are fair few right-wingers but they don’t tend to speak up for fear of being stigmatised, especially when the panel is generally to the Left, Cameroon Tories included!

So what has politics descended to when there aren’t any ideological differences – in fact, there isn’t any ideology at all. Yep, that’s right – jumpers! I kid you not. For my international friends, a jumper is – in the American-English parlance – a pullover sweater (or sweader, as they say on the other side of the pond!). Something bizarre happened in the journalists’ briefing in the heart of Government this morning – also known as the Downing Street Lobby – when the Prime Minister’s spokesman said it would be a good idea for all those people out there feeling the cold, but unable to pay the cartel-level energy prices, to jolly well put on a nice jumper. Cue the Labour Party leader’s team descending to Twitter and the hacks falling over themselves to tell a good jumper yarn.

The best write-up of Jumper-gate (yep, it had to get it’s own “-gate”!) has to be Guido Fawkes who has been delving in the picture archive. One of the best ones has to be master of the political dark arts, Lord Mandelson.

I have just received a note from David Cameron entitled “Help us to finish the job”. It is full of vacuous phrases like “Let’s never lose sight of what we’re fighting for: a recovery that all hardworking people can share in. Good, decent, well-paid jobs.” I don’t normally comment on these CCHQ missives but when I actually SEE the Government fighting for “decent well-paid jobs” I’ll start to parrot the rhetoric. That is just not true. Much of the unemployment decrease is down to people being forced into part time jobs and those who kept their jobs during the Great Recession (caused by Labour) have had to endure pay decreases to keep those jobs. And this does not even take into account the fact prices are outstripping wages month after month. Now, I’m a Tory member (still) but even I can’t swallow falsehoods of this kind.

One of the arts of political rhetoric is to at least be on the right track if tackled by your opponents. How on earth could this Coalition Government claim to be fighting for “good, decent well-paid jobs”?There is zero evidence of this – all around us prices are rising above wages, the Government’s goal seems to be to keep people off the dole come what may, even if it means Britons working for a pittance, which many are now enduring! I’m not blaming the Government for this per se, but saying they are trying to do something about it is ridiculous! I’d love to hear what my fellow right-wing readers think of this.