It seems Douglas Carswell was right in his recent book The End of Politics and the Birth of iDemocracy – power no longer rests in councils and parliaments, it rests in cyberspace.

Ipswich Borough Council have today removed the litter from the footpath between Gladstone Road and Foxhall Road hours after my blog post about this debacle. 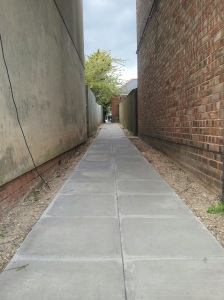 Blog pressure: litter is picked up from footpath

I do hope, as CP said in my earlier post, this is not a one off and the footpath will be litter picked regularly from now on? It would be nonsensical for IBC to claim the path is not adopted and is therefore a public footpath as they have now laid slabs and litter picked (once).

Who is fly-tipping on Gladstone Rd/Foxhall Rd footpath? Report them to the Council today

This whole affair is a double-edged sword as it is pretty disgusting to see so much litter being disposed down this neighbourhood footpath. I do hope these blog posts on the subject will help to shame the regular offenders to change their behaviour – it is not acceptable and it is also illegal!

I see the “fly tipping” is still there but has been neatly put into a row…I wonder if the Council did that or our mystery fly tipper?

Who do you think is responsible for picking up litter on a public footpath?

Ipswich Borough Council have not only shown themselves to be corrupt in recent days they are now finding every trick in the book to not maintain and clean a public footpath which connects Gladstone Road to the shopping parade on Foxhall Road.

Regular readers will recall this is the infamous passageway which took the mandarins at Grafton House three years to pave and required Committee, Executive and Full Council approval before civil servants would consider doing a bit of “community improvement” in a Conservative ward.

Through constant chasing from Holywells ward councillor Liz Harsant and pressure from this blog the passageway was finally paved in October last year after first being approved by the cross-party Community Improvements Committee in 2009!

The path – as was said when the proposal was first presented to Committee – has (in local government jargon) “heavy footfall” throughout the day. Unfortunately, many of the pedestrians decide to discard their litter as they pop to the Co-op or the kebab shop. The shallow trenches (drainage channels would be too strong a description) along each side of the path are now strewn with cans, bottles, and food packaging.

I reported the littering to Cllr Harsant and she diligently took it up with civil servants at the Council offices. What followed was like a sketch from political satire The Thick of It.

Firstly, officers denied the passageway was a public path. How do they account for the Council laying concrete slabs along it last October then? Are the Council in the business of doing private building works now on behalf of the hard-up taxpayer? Perhaps I should get them into my house to do a bit of plastering or maybe get them to sand down and paint the lintel over my front door?

However, IBC changed its mind and said they were still the “principal litter authority” and it was their responsibility to clean up the passageway. Phew, I thought – the council tax I pay might actually benefit me for once! But no such luck. Ipswich Borough Council decided to send someone up to the footpath, not to pick up the litter, but to look at the litter. They then reported back to Cllr Harsant that as they didn’t know who had dropped the litter they are unable to remove it.

Apart from having my wheelie bin emptied once a fortnight, what do I pay over one hundred pounds a month to the Council for? Ensuring your local streets and footpaths were kept clean used to be a basic “service” from the council. Now it would seem all the money is spent translating documents into forty languages or dishing out grants to made-up charities and not on picking up litter in your local neighbourhood.

No wonder people are fed up with the political establishment in this country.