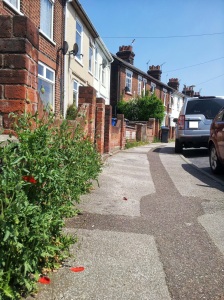 UPDATE: Thanks to readers’ comments.
To clarify, the EU HAS banned a particular herbicide which would stop the weeds by the side of the pavements in Ipswich growing to the size of small trees, which was until circa 2008 sprayed at the beginning of spring to kill the weeds before they grew out of control.

Because of the pernicious EU directive, Ipswich Borough Council along with all other local authorities in the UK (other countries just ignore the Directive) now can only spray weed killer on to the ugly green things once the weeds are about the size of a small man, which is during the summer months. A different herbicide is used once the weeds are grown, which isn’t banned by our unelected leaders in Brussels.

So this explains why some readers have seen the council’s man driving along the pavements in their weed killing buggy and others still have to hack their way past their front-gate to get to their home. Eventually, Ipswich Borough Council will get round to spraying all the weeds in the town on public pavements and paths.

Perhaps, IBC could allocate some money away from “diversity” projects to deal with a problem the council taxpayer actually wants sorted out?

Yes, not corruption, communism or even meddling – but weeds. Lots of them.

Have you noticed if you take a stroll around your neighbourhood that over the last few years, there have been an abundance of the ugly green things sprouting up from the edges of the pavements, crawling up people’s garden walls?

Well, it wasn’t always so. But since the EU Directive against the use of herbicides by local authorities the weeds have taken over our streets. Ipswich Borough Council – or any local authority for that matter – is no longer allowed to send a man and a container of weed killer spray to kill the offending green uglies at the beginning of spring. So come summer – i.e. now – the weeds have become like small trees by the side of the pavement in every street in Ipswich.

So despite paying over a hundred pounds a month to the Council and thousands in tax to the Government, which are then sent to the EU, I have been forced to kill the weeds myself to make my garden wall look respectable (you might notice the green-absence in the centre of this photo!).

You couldn’t make it up…