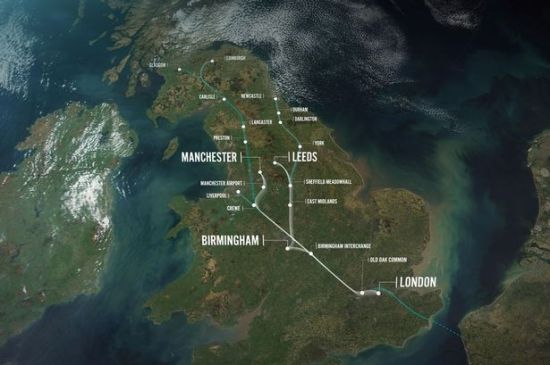 Unlike the OAP nimbys who are complaining about HS2 shuddering over their graves when it is finally completed in 2033 I am wholly in favour of this infrastructure project.

The new rail network will be Y-shaped and once the first phase (as I reported a year ago) from London to Birmingham is completed it will split into two high speed mainlines, one to Manchester and the other to Leeds.

This will be an excellent piece of engineering which will enable an economic boost during its design and construction, with 100,000 jobs expected to be created, and when it is finished it will increase trade between the capital and our great northern cities. It will do this by cutting journey times between Manchester and London from two hours, eight minutes today to 1 hour, 8 minutes. This will be a real step towards narrowing the North-South divide.

It makes me angry that men and women in the twilights of their lives, in particular those whiling away their days on local councils and who have been popping up on our 24 hour news channels today, are mounting campaigns against HS2. Have they been on a train? Have they used a motorway? Perhaps they shouldn’t if they are so set against development and faster communications?

These nimbys are only concerned with their pretty little affluent villages, where no person under 40 can dream of affording a house, being too close to the new line. But what about the benefits in bringing the economic powerhouse of Britain closer to the rest of the population, increasing trade and jobs? They haven’t given it a second thought.

Compare this to a small town called Toton which will be the site of the East Midland HS2 railway station serving Derby and Nottingham where local residents are on the whole delighted their town has been chosen to site one of five new high-speed railway stations. They did the maths and realised the benefits.

As much as I am very positive about HS2, the announcement today highlights again how the East of England is severely neglected by Whitehall when it comes to infrastructure improvements. There isn’t even one motorway in the whole of East Anglia. We have a railway line from Norfolk to London but it is in an appalling condition, with ubiquitous signalling faults, only one line north of Chelmsford, and by the time HS2 is built it will be faster to get from Birmingham to London (49 minutes) than it is from Ipswich to London (one hour, fifteen minutes).

Three weeks ago (as reported by Ipswich Spy) Network Rail published their proposals for investment on the Great Eastern Mainline but the £1.4bn required to mainly renew signalling and overhead power lines still must be approved by the Department for Transport for the money to be released. Even if the investment is green-lit by Transport Secretary Patrick McLoughlin it is merely tweaking around the edges as no plans are in place to lay additional tracks north of Chelmsford. With only one line north and one line south, all it takes is a broken down freight train on its way to Felixstowe to cause chaos for commuters trying to limp home late at night from their jobs in London.

Why is it that successive Conservative and Labour MPs in Norfolk and Suffolk neglected the East of England for so long when it came to urging ministers to invest in our roads and railways? It showed a complete lack of foresight. It is great to see Ipswich’s MP Ben Gummer working hard to turn things around with his constant lobbying for the town in the corridors of Whitehall but if his father – now Lord Deben – had been just as forthright when he was MP for Suffolk Coastal for thirty years we could have had a journey time of less than one hour between Ipswich and London today in 2013. Instead, we have the prospect of our Brummy friends getting to London, over 120 miles, quicker than it takes an Ipswich commuter over 80 miles.

Now, where’s nice to live in Birmingham I wonder?

3 thoughts on “Do you nimbys use the motorways and railways?”