Ipswich Conservatives have already started their campaign for the elections to Ipswich Borough Council on 3rd May 2012. On Saturday, I received a leaflet through my door with a collection of stories from around Holywells Ward but the main purpose of the literature was to promote the new Conservative candidate, Pam Stewart, who features prominently on the front page. 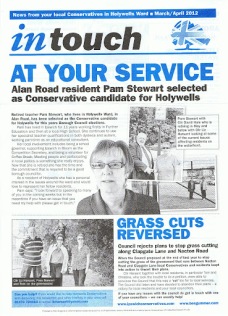 Pam Stewart is the wife of Cllr Chris Stewart, who represents Whitton Ward on the Borough Council. I am reliably informed Mrs Stewart is intending to ask a question as a member of the public at a full meeting of Ipswich Borough Council tomorrow, which should be a good indication of the strength she will bring to the Conservative Group if elected.
As a service to my fellow bloggers and all those who are interested I have uploaded both sides of the leaflet to ElectionLeaflets.org at http://www.electionleaflets.org/leaflets/7038/.
I intend to upload all leaflets which land on my doormat between now and polling day to encourage political discussion on the Borough Elections from the various political blogs we are lucky to have in Ipswich. I am sure, collectively, our reports and comment will be far ahead of what will be on offer in the Morning Ipswich Star.